Christmas craft, end of year concerts, lesson plans from Blockbuster, cleaning up, games days are all good ways to keep them busy and maintain your sanity.

With a class of 20 senior boys I doubted Christmas craft would engage them for the last 2 weeks. So I gave them a mini in class project. After working out which ‘Intelligence’ we identified with (From Howard Gardner’s Theory), they got to choose their own activities form a list of 35. They were grouped into intelligence types and covered a range of tasks on the topics of  Energy and Electricity. They had to total 20 points worth of work to be handed in on the second last day of term.

Well with a class of boys the majority of learners identified themselves as being ‘Bodily Kinaesthetic’ – no surprises then that they all chose to BUILD something!  Cars, houses, lighthouses, switches, circuits… the room shortly looked like a war zone, with electrical equipment and construction craft everywhere.

EEK!  End of the year, I’m preparing to move classrooms and I’m making more mess!  This was a bad idea. But then I notice… everyone is on task. Sure they are noisy, and messy but busy tinkering and talking and thinking. And they are working on these tasks ALL DAY. So I’m accepting the mess and letting them finish the year enjoying the time to create, innovate and debate. Oh and I have some Christmas tasks ready, just in case. 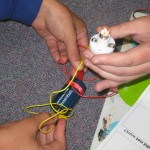 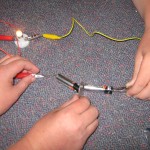 People Who have Inspired Me